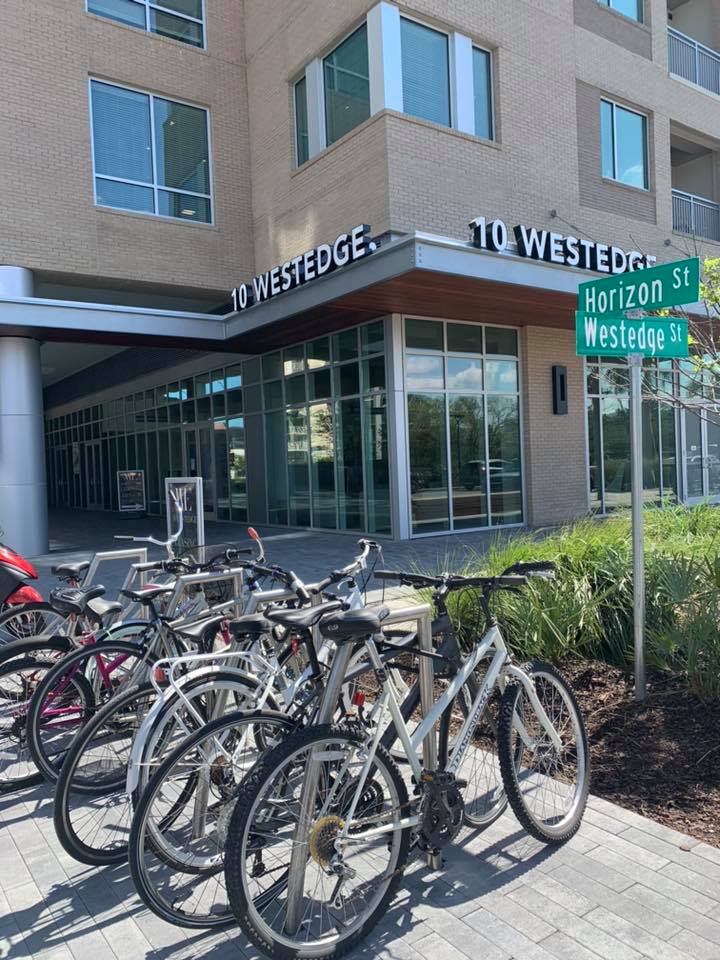 Charleston, SC (October 17, 2019) – Development at Charleston’s master-planned mixed-use WestEdge district is well underway, and residential units at The Caroline and 10 WestEdge buildings are filling up quickly. More and more, people are looking for options to live close to where they work, and WestEdge is delivering that opportunity. Leasing managers estimate that well over half of the two building’s new residents reportedly work or attend school at nearby MUSC.

The WestEdge district already boasts over 450 residents. With 360 of those residing in The Caroline building, which opened in May of 2018. As of September 2019, the residences were at 95% capacity, with 224 occupied.

“If you find yourself outside of our building during heavy commute times, it’s evident where everyone is headed – and nearly everyone is commuting over to MUSC on foot or on two wheels,” said Ed Schellenger, Community Manager at The Caroline.

Michael Maher, CEO of The WestEdge Foundation, Inc. couldn’t be happier about the  neighborhood’s new residents. “We always envisioned WestEdge as a walkable and bikeable district where residents could live in close proximity to where they work, study and shop, and that’s exactly what we’re seeing, even in the development’s early stages.” said Maher. “These residential trends are an effective response to concerns about congestion and traffic, heightening the need for a district like WestEdge in the Charleston area.”

With such a competitive market, the neighborhood’s 10 WestEdge building opened just in time.  The building, located on the corner of Lockwood and Spring Street, began resident move-ins in spring 2019. As of September, 10 WestEdge has already leased 104 of it’s 350 available residential units, with 21% of residents already occupying the brand new building.

“We’re just now beginning to see the impact that the medical district will have on our occupancy,” said Taylor King, Community Manager at 10 WestEdge. “With the shuttle stop right around the corner it seems there is always somebody from MUSC interested in moving here!”

Publix Super Market, the development’s flagship retailer, opened in April 2019, joining BkeDShop, Barre South, Jimmy Johns, and the newly-opened Hokkaido Sushi & Grill Restaurant, IX Artistry, 9Round Fitness and Domino’s Pizza. Woodhouse Spa will occupy the retail space along the Spring Street frontage of 10 WestEdge. Negotiations are well underway for a number of additional retail and restaurant spaces, ensuring an abundance of shopping, eating and living options for all.

22 WestEdge, the development’s iconic 125-foot, eight-story office structure, which broke ground in July 2018, is poised for a early 2020 opening, with office and retail tenants expected to begin occupying the space shortly thereafter. The building will be the tallest multi-tenant office structure on the peninsula and in Charleston’s metropolitan area when it opens, offering 150,000 square feet of office & lab space, as well as street level space for cafes, restaurants & shopping. The seventh floor of 22 WestEdge will be occupied entirely by The Charleston Harbour Club.

Upon completion, WestEdge will encompass more than 3,000,000 square feet of space on 60 acres along the Ashley River adjacent to MUSC and the Medical District, and fronting on Brittlebank Park and the Joseph Riley Baseball Stadium. WestEdge is a public-private partnership created to advance economic development and expand the research capabilities of the Medical University of South Carolina and foster new companies and collaborative opportunities with private industry. It is an innovative redevelopment that is transforming the quality of life for Charleston’s west side.